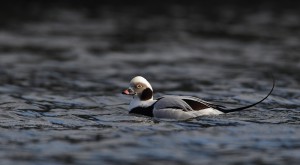 This long-tailed duck was a bonus. Nice looking bird in its winter finery.

I’m the somewhat underwhelmed owner of a 7D mkII, which I bought after long deliberation between that model and a used copy of the 1D mkIV. I suspect a major reason for my lack of enthusiasm regarding the former is the fact that it has so many settings that I simply haven’t worked out how to use it yet; I can’t deny that for BIF it works mindbogglingly well, as the Cape Gannets from December proved so admirably.

A photographer friend owns the 1D mkIV, it is his backup body and he’s curious about the new 7DII, so we simply decided to swap for a while, to see if he’s able to make the 7D perform while I see if I made a mistake buying the new 7DII instead of a used 1D.

Yesterday was my first outing with the 1D mkIV, and I have to say that I love it. I went to shoot purple sandpipers at their well-known winter rest, and I came home with very many nice shots. The following are just a quick sample, and since I didn’t switch housings during the session it is a particularly unscientific “comparison”, but I did get the impression that I was getting more “keepers” with the big housing. I’ll reserve final judgement until Christian has checked the 7DII against his superior photography skills, but for now I’m thrilled to be sitting on a 1D mkIV, even if it is just for a short while.

The purple sandpiper shots are in this gallery, remember to click them up and use the f11 option in your browser, to see the images in their best possible light.

The day was initially quite overcast, only later did the sun come out a little. 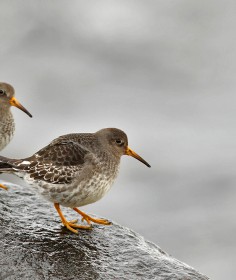 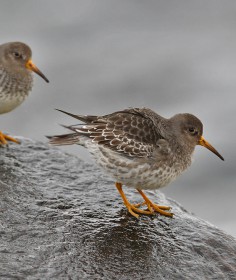 When your habitat is the borderline between ocean and (rocky) shore, you do get wet once in a while – so a good shake is called for.

I like to try and make the shots a little dynamic by adding movement and water spray. 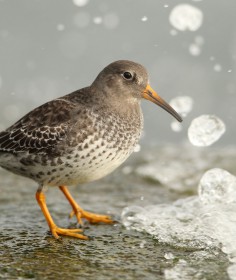 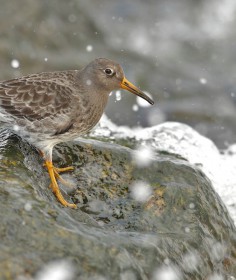 It is impressive to watch them run all over rocks that we’d fall arse over tits off at the first step. 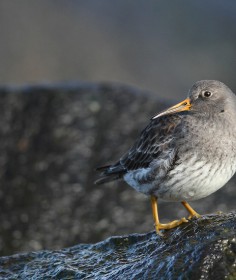 Sometimes simple is good too.