As we used to say when I was paragliding a lot around Denmark; if we were half as useless at OUR jobs as the meteorologists seem to be at theirs we’d be unemployed… So they had promised a sunny, pleasant autumn day and I was looking forward to a day of locating and shooting Sanderlings and Purple Sandpipers on the beaches of Western Jutland. Alas, come morning the meteorologists had revised their forecast to one of strong downpours with quite a bit of North wind.

As you can see from the few shots below I DID actually find some Sanderlings – and as you may be able to see, it wasn’t good for the (new) camera… Drifting sand really does get in everywhere.

But they’re great little birds, darting about at lightning speed, challenging the prone photographer. I shot maybe 40 frames of this little lot, only these three were any use.

Sanderlings are arctic waders. The ones we see here migrate from their breeding grounds in Siberia, Svalbard and Greenland down to southern Africa. They pass through Denmark both in spring and autumn, with the ones shown here probably being juveniles on their first big trip abroad. They can be quite trusting, sometimes foraging to within metres of the photographer’s lens.

Images were shot with the “new” EOS 1D mkiii and the usual lens (300mm f4 plus 1.4tc) – I would have liked to have tested some more but once these were on the card I, and the camera, had just about had it with sand blasting. Click on one of the images to browse through the gallery. 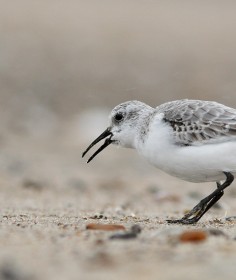 Busy filling the fat depots before the long journey South 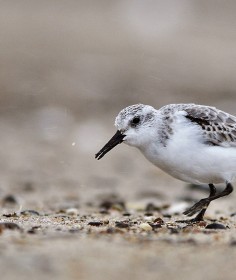 The lines in the image are sand grains being blown across the beach by the very strong wind. I was down there for a couple of minutes max, and had an eyeful as well as sand everywhere there was an opening. The little critters LIVE down there, their eyes must be permanently full of sand.