…of hormones that is…

Once I was done with the Bluethroats I moved to another west coast site where I once spotted a flying Bittern, hoping to hear it call during the night. The Bittern DID call, and the following morning the Bearded Tits made an appearance. They aren’t very easily frightened, but they are hard to get decent shots at all the same because they tend to stay down among the reeds. I spent probably around 3-4 hours walking up and down a small road leading through the reed bed to get these very few images, but I had a great time. The Bittern hadn’t learned that it is meant to only call during the night, so the sound of a lovesick Bittern accompanied my endeavours, while an early Sedge Warbler made a guest appearance alongside the abundant reed buntings. 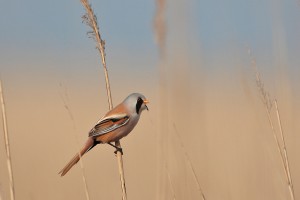 It was a windy day, so I took advantage of the swaying reeds to shoot when the bird came out of cover briefly.

And a try at a different composition, not the same frame by the way.